Using The Garrote – The USMC Way

As a fan of The Godfather, I always associated the garrote as a weapon of the mafia. That was where I first saw it, and that was always my impression. I didn’t think much about the garrote. It was tucked away in my brain as something from a movie and the Hitman series of video games. 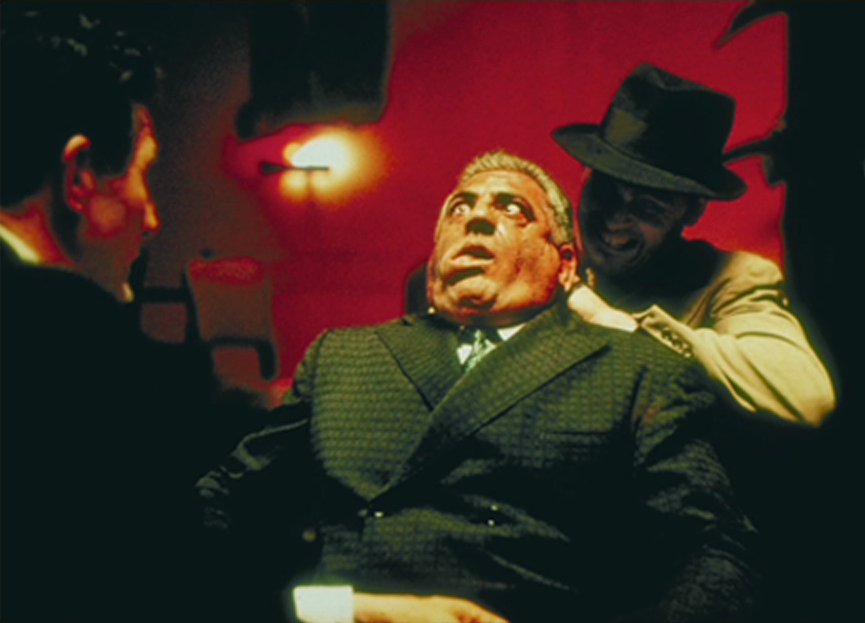 Imagine my surprise when I was browsing through an old Popular Mechanics magazine and found an article called Tough Guys by Wayne Whittaker. The article details the hand-to-hand training of soldiers and Marines heading to fight in World War 2.

The garrote gets mentioned. With my curiosity peaked, I began to research the use of the garrote from a military perspective. Imagine my surprise when I found the military background of garrotes goes back a fair way.

In World War 2, Commandos carried garrotes to remove sentries. As I researched, I found that believe it or not, and the garrote is still in use today. Well, I don’t know how many soldiers are carrying one these days, but the institutional knowledge still exists.

Two modern military forces, both with their reputation for tenacity and brutality, have some form of institutional knowledge regarding the ole choke rope. The first is the French Foreign Legion, and the second is the United States Marine Corps. Since I can’t read French, we are doing it the USMC way.

The Garrote in the USMC

I served five years as a Marine infantryman and never knew the USMC had garrotes in the armory. It’s not something commonly taught between grenades and machine guns. A friend of mine went careerist in the Marine Corps and served as a MCMAP Instructor. He became one of the higher-level black belts. He casually mentioned the fact that as part of improvised weapon training, they learned how to make and use garrotes.

You can’t casually mention that to me. I had to dive in and see how the USMC teaches Marines to choke people to death. Hell, if I knew that was an option, I would’ve sought out more MCMAP training. I grabbed a MCMAP manual and did some light reading on how to strangle someone.

Here’s how they describe the garrote.

Improvised weapons, such as hard and soft garrotes, are made from locally available material. Unlike weapons of opportunity, improvised weapons are designed as a weapon for a specific function. The most common use of improvised weapons is for the silent removal of sentries during a raid, infiltration, reconnaissance mission, or other tactical scenarios as a means of incapacitating a potential prisoner or for use during a survival, escape, and evasion situation.

There are several methods for employing the various types of garrotes. The method chosen will depend on the tactical situation and intended results. The employment of a garrote is considered deadly force. In most cases, the garrote will be employed when silence and stealth are required.

The approach and close with the aggressor should be deliberate and noiseless. Stay low with your body below the aggressor’s line of sight. The entry should be rapid while applying explosive force to achieve the best results.

The Flexible and Hard Garrote

Flexible garrotes are wires, fabric material, ropes, and the like. Hard garrotes include sticks, batons, and similar rigid items. The Manual teaches ways to use both from the front and rear of a threat. As you’d imagine, the rear garrote is the preferred method, and the front is used when detected by the threat you’re trying to remove.

Personally, the front choke with a garrote looks like a pain in the ass, and I’d likely just revert to punching, kicking, and biting rather than attempting a front choke.

With a Flexible Garrote

• Place your left-hand palm side up in the center of your aggressor’s back just below the neck.

• With the inside of your right foot, collapse your aggressor down by striking the back of his right knee and riding it down to the ground.

• While staying close to your aggressor and still stepping on the back of his right calf, pull down and to the right with your right hand, while leaving your left hand in place until your aggressor is unconscious. 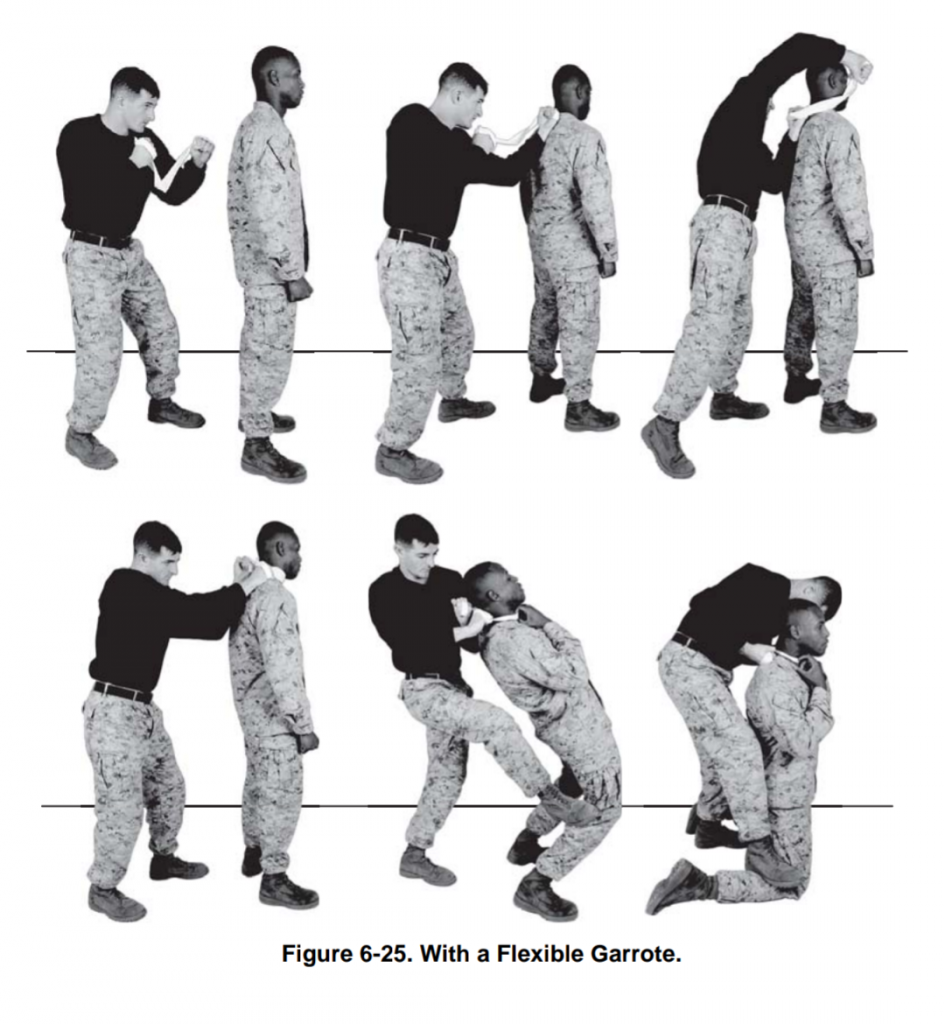 With a Hard Garrote

• Shoot the long end of a garrote across the aggressor’s neck. From right to left, palm side up with the right ulna bone making contact against the aggressor’s right carotid artery.

• With your left hand, grab the garrote palm side down, placing the weapon across the aggressor’s left carotid artery.

• While keeping your elbows in tight, squeeze with both arms in a vise motion until the aggressor is unconscious. 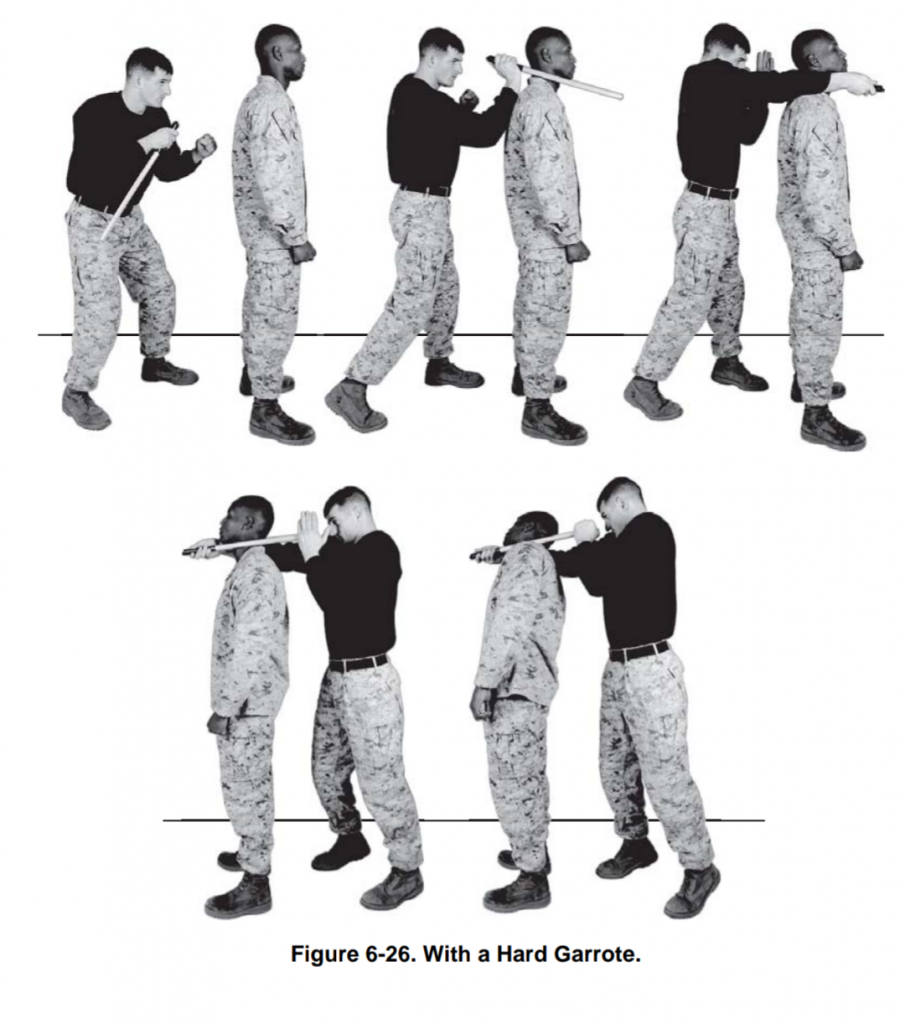 With a Flexible Garrote

• With both arms straight out in front of you, move forward toward the aggressor’s neck.

• Collapse the aggressor down to the ground by striking the back of the aggressor’s right knee with the inside of your right foot.

• While staying close to your aggressor and still stepping on the back of his right calf, pull down and to the right with your right hand while leaving your left hand in place until your aggressor is unconscious. 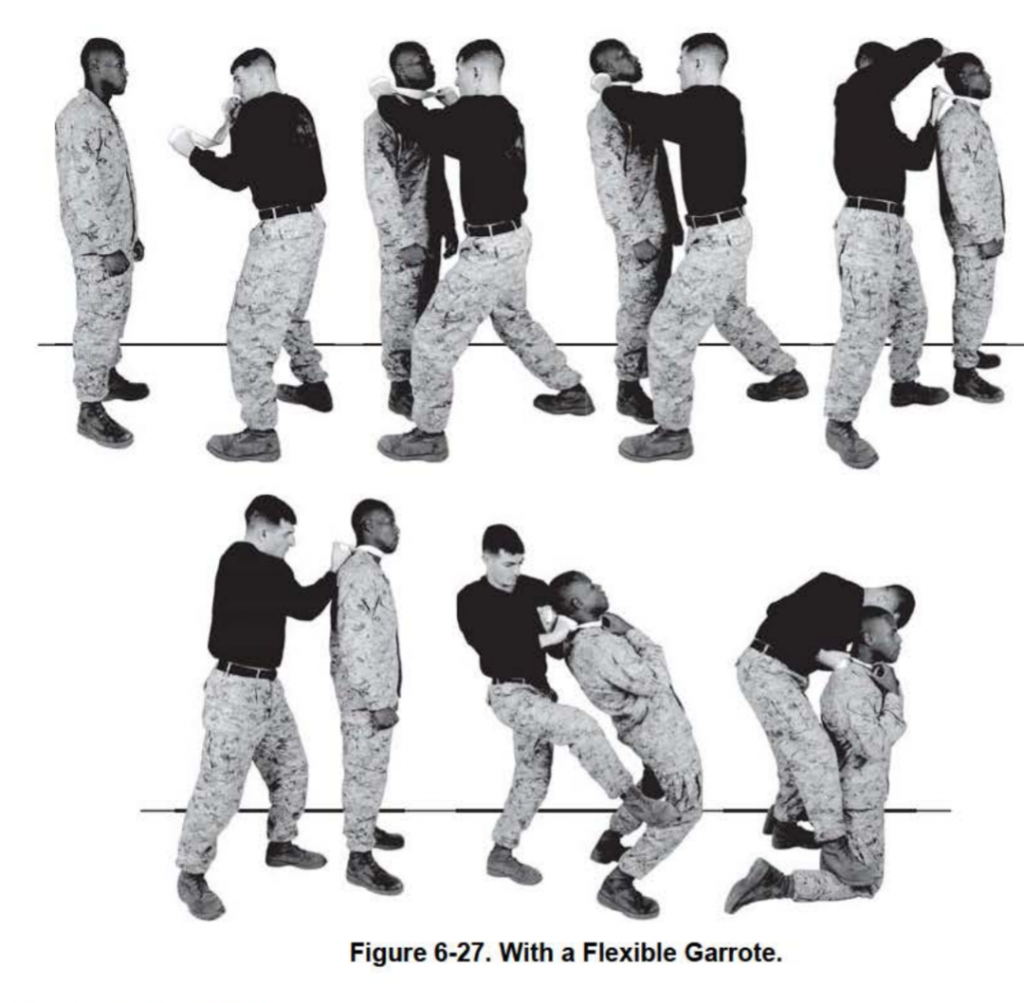 I used a Century Bob to practice the techniques in every way but actually kicking the legs and bringing the aggressor to the ground. The rear, flexible garrote technique is by far the easiest, and with a little practice, I could execute the technique fairly quickly.

The hard garrote provides a little more challenge, but it’s doable, and you can get fast at it with relative ease.

Front techniques seem to be a mess. Maybe they work with a skilled user. I feel like a bad guy with arms, and potentially a rifle would smoke my ass in half a second. It really seems easy to beat the guy down and then try and garrote them.

Front techniques seem to be more about how to handle a bad guy if he turned around as soon as you made your move. Only then could I see the technique being effective and practical. When you are already in motion, it’s good to know what to do when things go wrong at the last second.

Is removing a sentry with a garrote more effective than using a suppressed rifle with subsonic rounds? Hardly, but it’s fascinating to know it’s still something the Marine Corps keeps in their back pocket just in case. High tech vs. low tech. Check it out, the USMC MCMAP manual can be easily found online if you want to see the other techniques Marine ninjas use.

Source
Using The Garrote – The USMC Way is written by Travis Pike for gatdaily.com